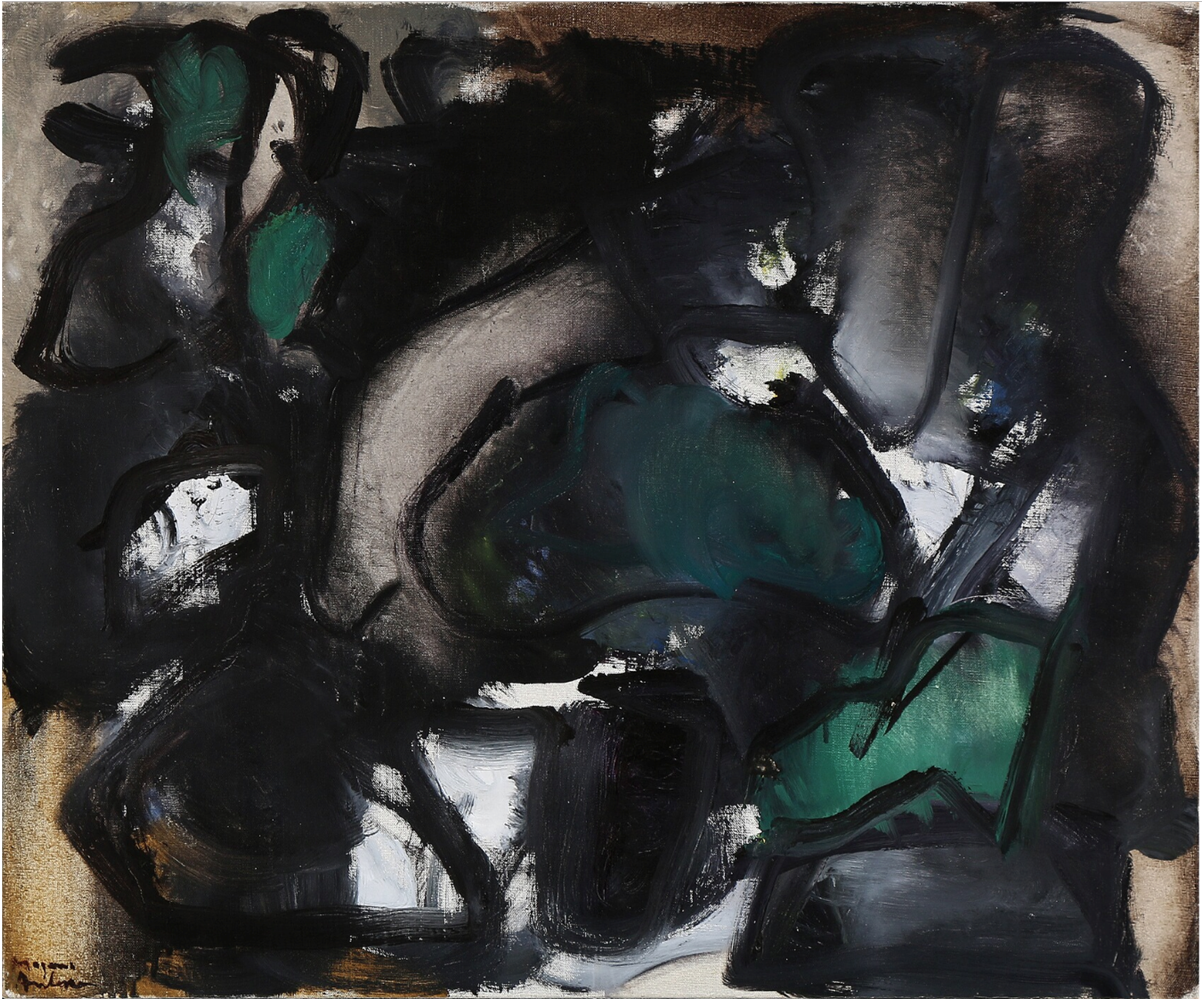 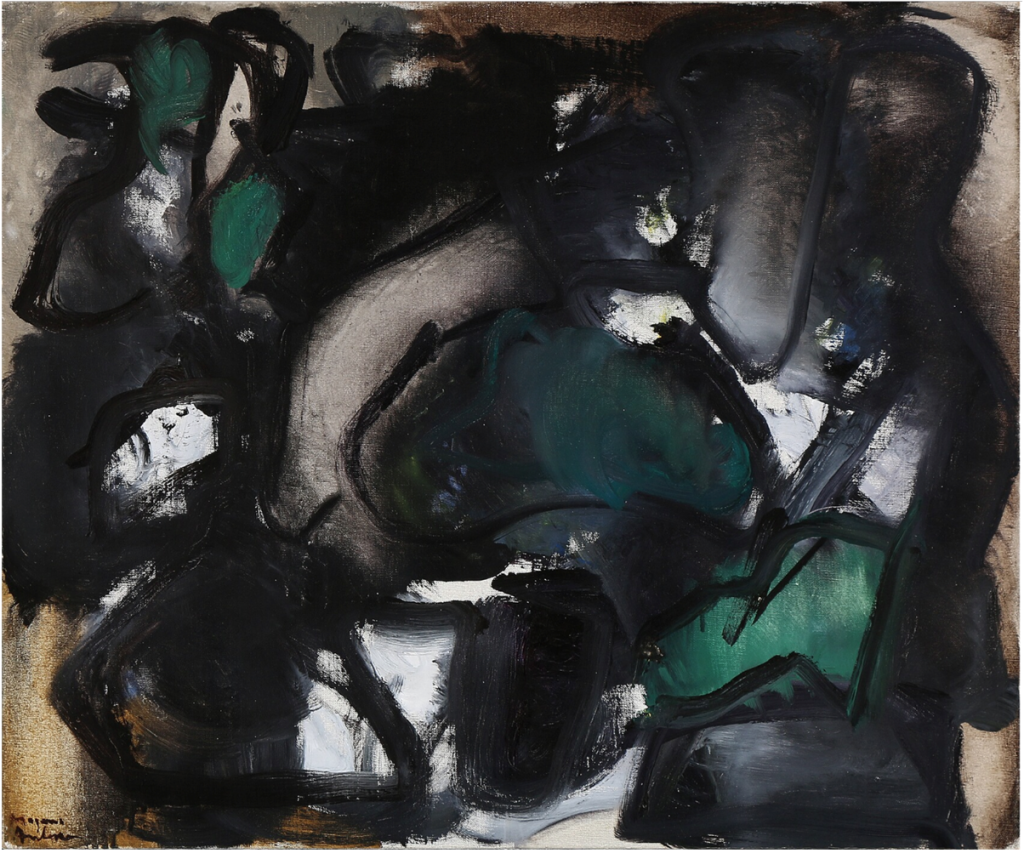 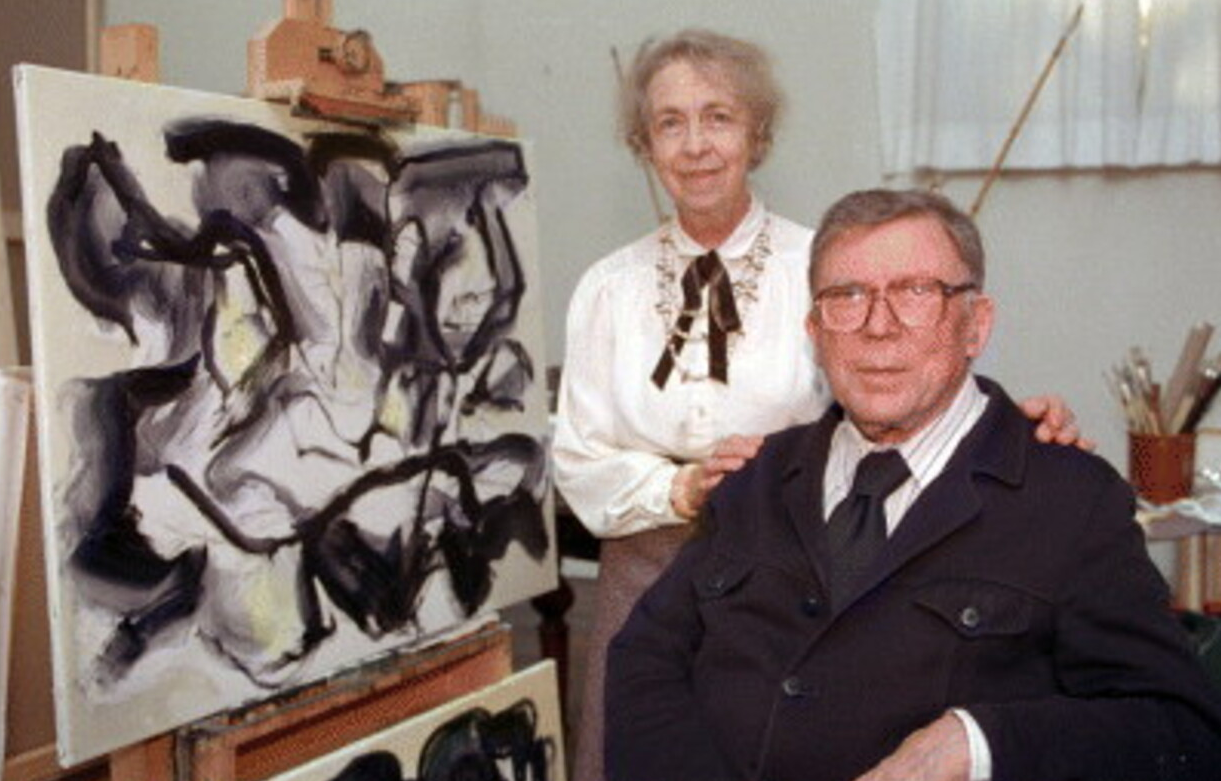 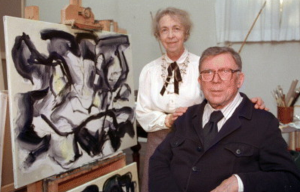 Mogens Andersen, 1916-2003, Danish painter. As a student at P. Rostrup Bøyesen’s painting school 1933-39, Mogens Andersen made his debut in 1935 at Kunstnernes Efterårsudstilling. In this early phase, he painted pastose figure pictures in the earth color scale, inspired by “dark painters” such as Svend Guttorm and Niels Lergaard. But at the same time he began to take an interest in the early French modernism that had occupied him throughout his life. Since settling in Paris in 1945 (where he lived for periods until 1965), French lyrical-abstract art has been crucial to his form of expression. Inspired by i.a. Pierre Soulages and Jean Bazaine, he developed his characteristic dark, dynamic arabesques on light bottoms.

Mogens Andersen’s first major decoration of Copenhagen’s Main Library on Kultorvet (1957-59) caused a fierce debate about abstract art. Since then, he won wide acclaim and performed a wide range of decorative tasks, including a large ceramic decoration for the art museum in Bochum in Germany (1981) and the decoration of Sejs-Svejbæk Church near Silkeborg (1990). Mogens Andersen also expressed himself in color graphics, in tapestries, woven by Lise Warburg, and in ceramic works for Den Kgl. Porcelain factory.

Mogens Andersen was also a diligent writer, and his personal development and relationship to art can be traced in the books Modern French Painting (1948), Around the Sources (1967) and Necessary, but Still Like (1976), which were followed by several memoirs. He developed a pedagogical work, among other things. at the continuation of Rostrup Bøyesen’s painting school 1952-59, and his many positions of trust include the chairmanship of the Statens Kunstfond 1977-80. Mogens Andersen was a member of several French and Danish artists’ associations, including Bølleblomsten 1942-50 and Grønningen 1953-65 and from 1984. He received 1949 Eckersberg Medal and 1984 Thorvaldsen Medal.